Electric Ladyland is a museum that comes with a playlist. It bills itself as the first and only museum of fluorescent art, and it sure isn’t like anything else I’ve come across. It may also be the most hippy place I’ve ever been to. The museum itself is in the basement of an old Amsterdam building on a small street, downstairs from a room that seems to be a cross between a gallery and an art studio. 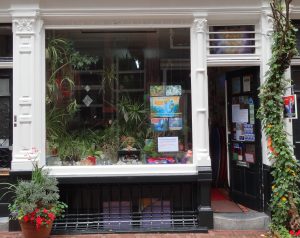 Entrance to the gallery

Once you navigate the tiny Dutch staircase you enter a room that, under normal lighting, looks like a collection of miscellaneous things: some plain paintings, a few shelves of minerals, some old technological things, and a glowing multicoloured lava formation. The sorts of things you find in so many small museums around here. 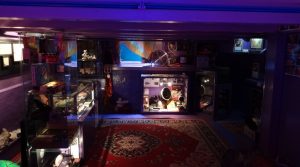 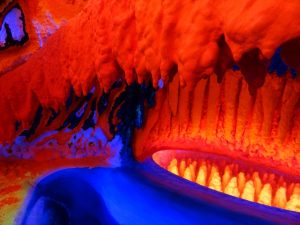 A puddle of lava formations 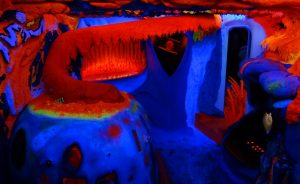 Note: none of the photos I took here have any post-processing applied aside from some cropping, there’s no HDR going on, only what my camera does to make low-light photos show up well (a side effect of this is that I had to throw many pictures out as the longer exposures are easy to end up blurry if you have no tripod. Luckily I took quite a few and a good number worked out.)

This cave is human-sized if you’re careful not to bump your head on the stalactites, and climbing around in it is encouraged. There are also interactive button-pressing things you can do to changing the lighting in part of it to see how things look different under different types of UV. The differences between short- and long-wave UV are best seen by going there and witnessing them in person, just let me say that the sorts of UV lamps you get in a club have got nothing on what they show you here. On the other hand, they won’t give you sunburn too.

I would have like to get a lot of before-and-after pictures of the art pieces, but unfortunately it’s not a big room and it was reasonably full of people so that was hard to coordinate. However here’s one I did manage to get: 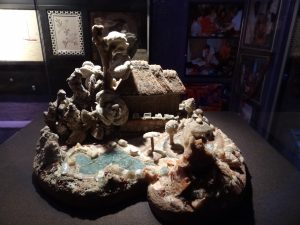 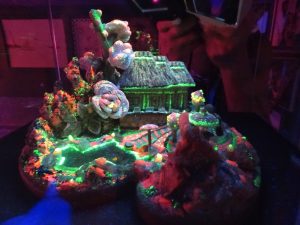 There’s quite a good sampling of what people have done with fluorescent art, and the guy presenting (Nick I think is his name) will explain in depth anything you want to know about the methods, the minerals, where they come from, how they were made, and the history of the styles. 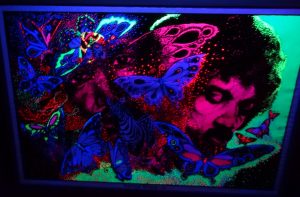 There’s also a number of collections of the minerals that are, in some cases, used to produces these artworks. 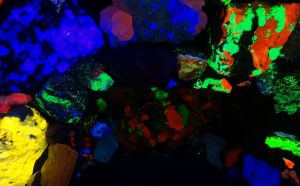 It’s not all about the things that glow, there’s also some displays discussing the history of UV, of fluorescent art, and other things along those lines. 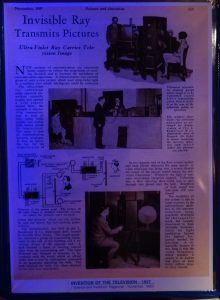 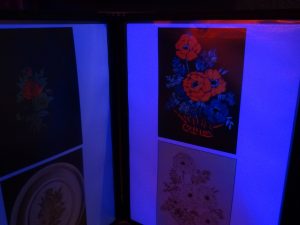 There’s one thing that I can’t show you pictures of here, and that’s the stories and the details that Nick goes into about everything. He has run the museum for quite some years now, and knows in great detail all the things there, and will happily tell you everything about them you could care to know. 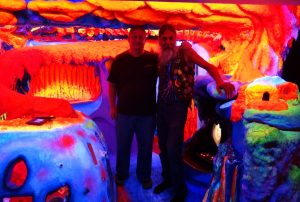 Beyond the above, there are a few things to note: 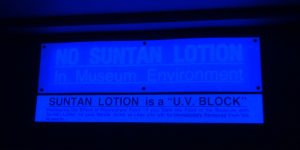 Baz Luhrmann was wrong. You are not free to wear sunscreen.

It took me about an hour and ten minutes to sort the photos and write this up, which is happily just shorter than the Jimmy Hendrix album of this name that I had playing while I did it. I finished to “All Along the Watchtower.“