I am attempting to gradually visit all of Amsterdam’s museums in roughly alphabetical order. The previous one was Hash Marihuana & Hemp Museum. The next is the Amsterdam Hermitage.

The Heineken Experience is another one of those oft-recommended attractions for visitors to Amsterdam. While it was the actual brewery until 1988, now it is a well-manufactured, high-tech visitor experience showing the history and the process of making “premium quality” Heineken beer. And a lot about the branding. Mustn’t forget that.

This particular visit was a long time coming, as I had already been here and knew what to expect, and so procrastinated a lot. While technically it fits on the list of museums, in reality it feels more like a slickly packaged marketing campaign. That’s not to say that it’s not worth visiting, but at the same time don’t expect to learn a whole lot that you probably couldn’t get from reading Wikipedia. So I eventually talked some friends into coming along so I didn’t have to go it alone, it’s definitely a place to go with some people. And I apologise for occasionally making fun of the beer, but it’s really its own fault for not being that good.

If you visit, be aware that there is an app you can install on your phone beforehand that gives you more information about things. I didn’t do this as I didn’t know about it until later. Also keep in mind that it can get really busy at peak times, so you may want to schedule a visit for a quiet time. A side effect of this is that there were many things I didn’t get photos of because I couldn’t find a way to do so through all the people.

The first part of the Experience is about the history. A guide starts by talking about some facts about the place and its history, and showing things such as the 6-storey chute over your head. Along with this, there are many old things for you to look at. 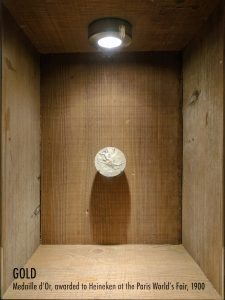 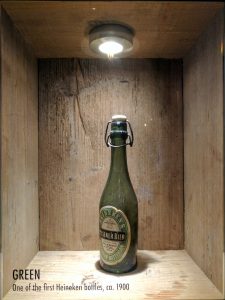 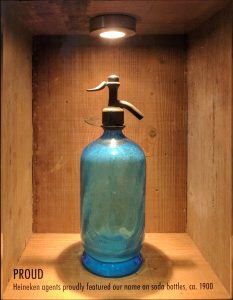 Heineken water. Indistinguishable from the beer. 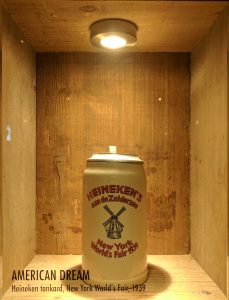 Heineken in a tankard was possible. 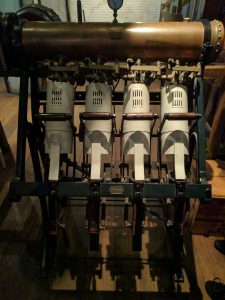 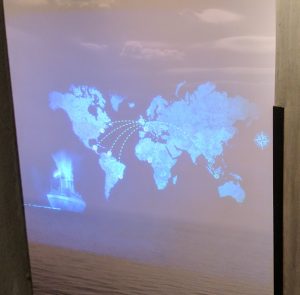 Heineken distribution. I should cross-post to worldmapswithout.nz.

After this first room, you proceed on to the museum area (aside: leading in to this, there was a sign I really wish I’d got a picture of. So imagine a sign like: <– history / bypass –> Perhaps this is a bit of a metaphor for the museum aspect of the Heineken Experience.) The museum area walks you through the various people who were involved in the brewery, and their story. Unfortunately it’s also pretty cramped and full of people, so you don’t feel the need to hang around and take it in. 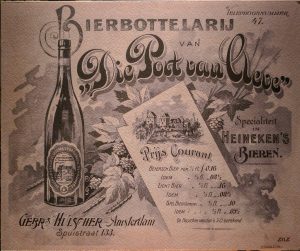 Early-1900s price list from Die Port van Cleve Hotel with a list of beers by The Heineken Company. 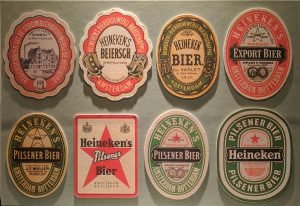 Evolution of the brand 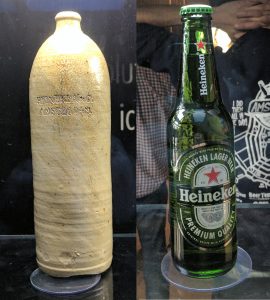 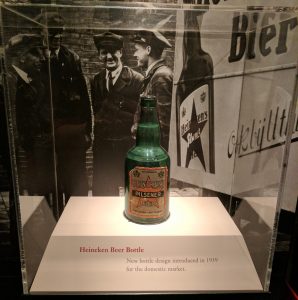 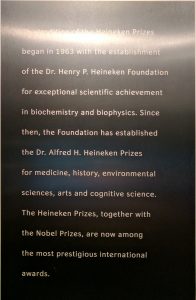 “The Heineken Prizes, together with the Nobel Prizes, are now among the most prestigious international awards” … personally, I’d never heard of them.

After all this history, it’s time to learn all about the brewing process! This is actually a super-light overview of how everything works, though you do get to wander around the actual old brewery and look into the vats. 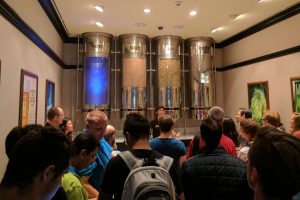 There is something wrong with that water… 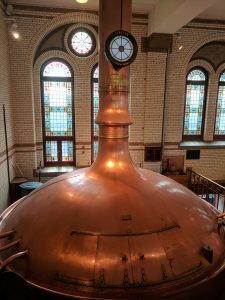 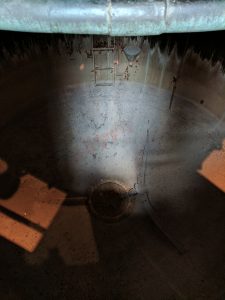 I don’t think they’re used much these days. 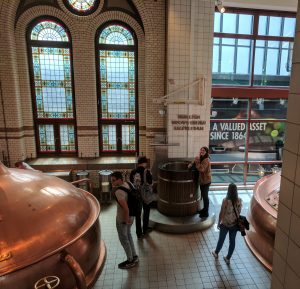 Marije having a go at brewing. 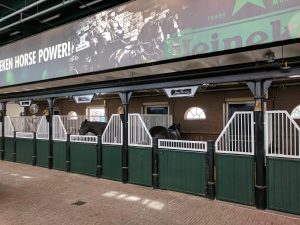 They have horses, too. I haven’t seen them carting beer through the streets of Amsterdam lately though.

Once you’ve cleared the brewing area, you go into what was once referred to as a “4D experience”, though I didn’t notice that name this time through. Essentially it’s a multimedia show of what the brewing process is like, from a first person perspective. Including spraying you with a few drops of water, and malting you like barley under a heatlamp. It’s really quite well put together, to be honest.

It didn’t make sense to get a photo of the show itself, but you can see the crowd waiting in line. 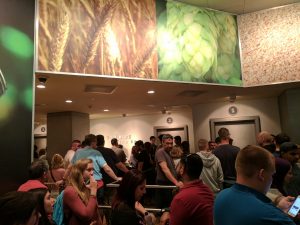 What you can’t see is the overflow line that contains twice as many people stretching off to the right.

After that, you finally reach the point that I think most people are here for: fresh “premium quality” beer: 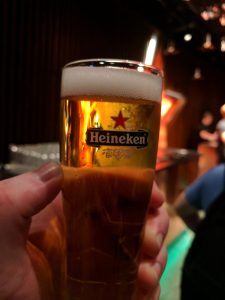 No doubt the perfect pour.

Here they spend a few minutes telling you all about the pouring of the perfect beer, how the head keeps it fizzy (what?), and how swiping off the top stops the oxygen from getting in (*cough*bullshit*cough*.) At least they give you a free beer. Well, a free Heineken. 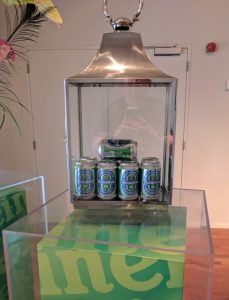 If you’ve come all this way, you probably don’t want the 0% beer.

Now you go into the bar proper. With your entry wristband, you get two tokens that can be exchanged for two more beers. Or soft drinks, if that’s more your thing. If the weather is good, you can stand outside on the terrace, which has a pretty nice view. Pro-tip: go to the far end, there will probably be fewer people there.

I can’t see my house from here.

Finally, you’ve expended your two tokens, and it’s time to leave (you can buy more beer, but you can also by better beer elsewhere.) First you’re taken through a weird warren of games and sponsorship. You get some odd games to play, like karaoke on a bike, and things with interactive screens. Then you see all the things that Heineken seems to sponsor, mostly sports things. 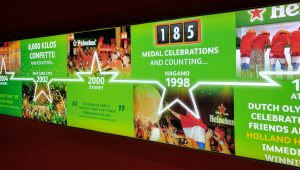 A timeline of marketing. 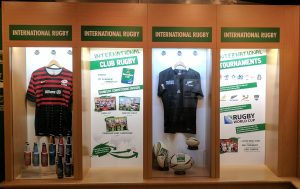 Lastly, you exit through the gift shop where you can buy overpriced bottle openers, socks, underpants, shoes, and so on. All with garish branding, naturally.

I’ve had a few people ask if they should visit, so I’ll include my opinion on that unlike normal. It’s a very slick tour, and you won’t be bored (unless you’re standing in line.) But you won’t learn much. So if you like fancy tourist-oriented things to do, it’s worth it. If you want something that’s less artificial when you’re in Amsterdam, there are plenty of better places to spend your money.

A final note: there are foosball tables regularly throughout the place. I didn’t see one that had a ball in it. It was weird.