I am attempting to gradually visit all of Amsterdam’s museums in roughly alphabetical order. The previous one was Hermitage Amsterdam. The next is Hollandsche Manege – Levend Paardenmuseum (Living Horse Museum).

Amsterdam has many nice parks, one of these – less well known to visitors – is Amstelpark, to the south of the city. It has a many activities available, such as mini golf and a minature train (at least, I saw the rails), gardens, trees, playgrounds, fountains, a labyrinth, and so on. It also has a couple of galleries. One of these, the subject of this, is Het Glazen Huis (the glass house.)

It’s a small art gallery, well lit (hence the name) that features regularly changing exhibitions. Inside it has a main gallery area, and in the back an area for video presentations.

That’s about all I know to say of the building, there isn’t much info online, so this’ll mostly be about the particular exhibition that was on. It’s a fairly short writeup as it’s a small place, but in the case of this exhibition, worth the visit.

The exhibition is titled “Reading by Osmosis – Nature Interprets Man” curated by artist Semâ Bekirović, and contains things made by man reinterpreted by nature. That might mean it’s being corroded by the sea, consumed by lichen or shellfish, built into a birds nest, ravaged by time, and so on. 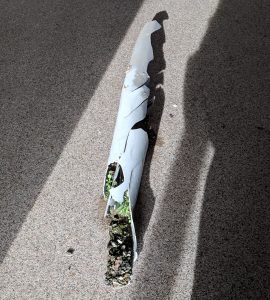 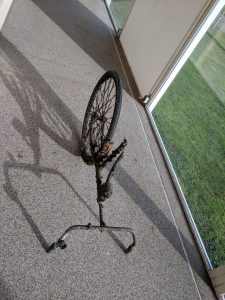 Basically the same condition as most in Amsterdam. In this case, attacked by freshwater mussels.

The pamphlet breaks the works of nature down into broad categories, analysis (decay, corrosion, entropy), and synthesis (symbiosis, aggregation, incorporation.) All of these sorts of things are shown here. 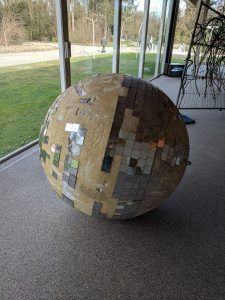 A disco ball vs. time. 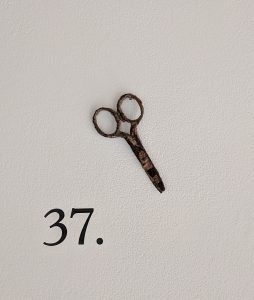 Scissors vs. the river Thames.

I don’t have a photo of it, but in the video area there was a film playing. Undocumented (that I could find) it seemed to be an octopus trying to eat a video camera. 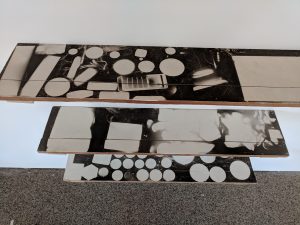 There were items on these shelves, then there was a fire.

This particular exhibition runs until the 17th April 2019. Afterwards, starting on the 13th May 2019 and running until the 25th of June, is another one titled “Trust me, I’m an artist” about ethics in science.

As for the park itself, it is definitely worth the visit if you enjoy parks. It’s off the beaten track for most tourists. 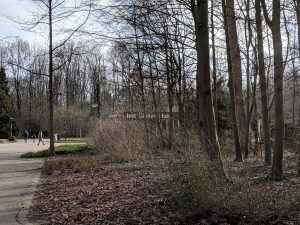 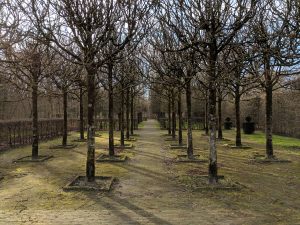 It’s a little hard to tell what’s on, the park’s own website does a very bad job of showing things. As far as I can tell, Zone2Source manages the art there, so their site might have more stuff on what is happening in the future.