I am attempting to gradually visit all of Amsterdam’s museums in roughly alphabetical order. The previous one was Het Glazen Huis. The next one is Micropia.

The Levend Paardenmuseum is part of an active manège, so unlike most other museums it is a place where historical techniques, in this case horse riding and dressage, are taught and demonstrated.

The building itself is pretty impressive and has monumental status. It is this that is really the museum. Unfortunately due to ongoing renovations there were parts of it that are currently off-limits, including the more museum-like part that has information about the building and its function. Fortunately I had timed my visit to one of their fortnightly side-saddle carousel demonstration.

It really is quite a nice building

It was also possible after the demonstration for interested people to have a go sitting side-saddle on a horse.

What could be accessed of the inside of the building was very old and stately looking. The tea rooms and the balcony area, from where the demonstration could be watched, in particular. It’s also possible to walk through the horse stalls area. 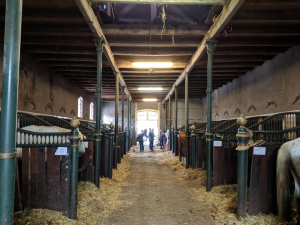 Stalls in the manège

A horse chomping away

Due to the renovations, the foyer area was closed off, but the booklet you receive on arrival talks about it having photographs and information about the building, its history, and the manège itself. 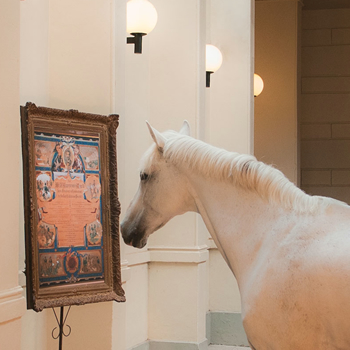 It also has this excellent picture / levendpaardenmuseum.nl

According to the staff member at the entrance, it will be closed to complete the renovations in August 2019, so hopefully after then more will be accessible.