I am attempting to gradually visit all of Amsterdam’s museums in roughly alphabetical order. The previous one was Electric Ladyland. The next one is Foam (Fotografiemuseum Amsterdam).

If you’ve been to Amsterdam Centraal Station recently, and looked north across the river IJ (pronounced “eye”), you will have seen the EYE Film Museum. A white, oddly shaped, non-rectilinear polygon of a building that houses a museum, exhibitions, cinemas, a restaurant, and extensive film-related collections.

This review is fairly short on photos, for two reasons. One is that while it’s an impressive place and worth visiting, it probably won’t take you a lot of time (unless you actually see a movie.) The second, with the exhibition currently showing, everything is moving, and it’s dark. This means that still photos don’t always come out so well, and that they can’t convey the purpose of the exhibits well at all. In addition, with so many projectors running, half the sensation is from the constant loud-but-quiet (it’ll make sense when you go) noise that you’re surrounded by. This is my way of saying “excuse the blurry shots that don’t look very interesting.”

I got in to see the small museum and the current exhibition, but first had a poke around the giant foyer area that contains the restaurant. 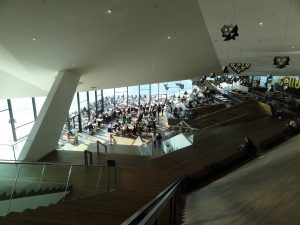 In this area are some listening benches that have headphones and buttons. Pressing the buttons gives you a story from the people involved about some aspect of making films. The camera work on Jaws (turns out the animatronic shark didn’t work in salt water so well, the editing from Run, Lola, Run! (which if you’ve seen it, you’ll understand. If you haven’t see it, see it), and more.

If you go downstairs, under the restaurant, there is a small museum with various examples of movie-making and viewing hardware. This takes you through a timeline of early stuff to the modern day, with working examples in some cases. 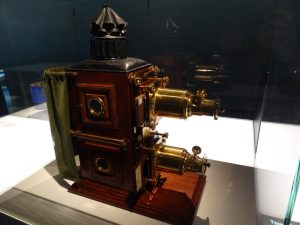 A “magic lantern” projector that would project two images simultaneously: one static, and one with moving elements. 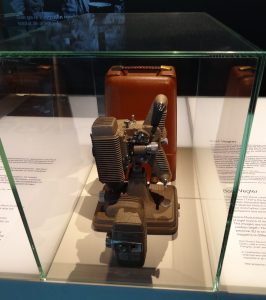 This wouldn’t look out of place in a motorbike. 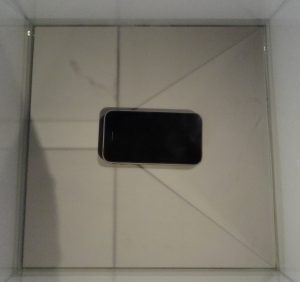 …all the way to the modern day (although that iphone looks a few generations old now.)

As well as the displays, there is a green screen you can play on, some mini-cinemas to watch stuff in, and one room that was impossible to photograph: in 360° around the walls were film clips from movies, from documentaries, from old cartoons, etc. all flying by. You could step up to one of several points and using a touchscreen, select from a bunch of clips and they would play in front of you with the sound isolated to where you were standing.

Up on level 2 is the exhibition room. The one showing at the moment is called Celluloid and is about the physical aspects of film, and the associated apparatus. There are some neat ideas here.

Some of the exhibits are short films that use the aspects of the recording or projection in some way, others are about the equipment itself. Two of my favourites are: 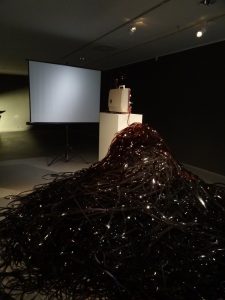 Every few minutes this comes on, and spits out another metre or so of film, never winding again, just piling up. 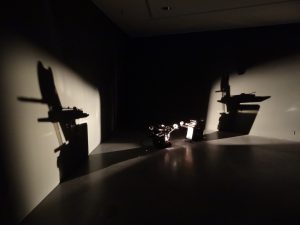 The projectors are projecting each other!

I’ll finish with a handful more pictures and a couple of short video clips that convey a little bit about the atmosphere, but they can’t begin to do it justice. 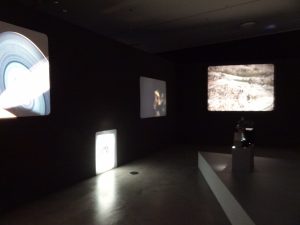 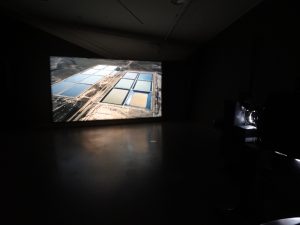 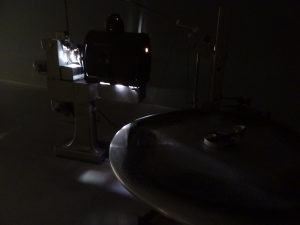