I am attempting to gradually visit all of Amsterdam’s museums in roughly alphabetical order. The previous one was the Amsterdam Museum. The next one is the Amsterdam Tulip Museum.

The Amsterdam Cheese Museum is clearly and unapologetically there to get tourists to buy cheese from their shop. And that’s fine. It’s located very near the Anne Frank House, and the shop takes up the entire ground floor. It’s not even on the Wikipedia list, I just got drawn in by the giant “Cheese Museum” sign at the entrance. 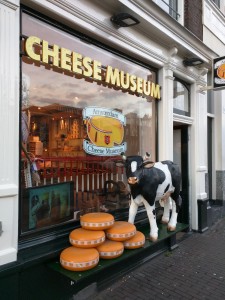 A friendly cow welcomes you to the cheese museum

Upon entering, you are in the cheese shop. Here there are quite a range of types of cheese, and tasting samples for pretty much all of them. Additionally, there are staff there cutting up more samples, and telling you anything you’d like to know about cheese. While dressed in what I suppose are traditional cheesemonger outfits. 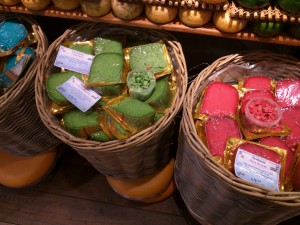 Cheese can come in all shapes, sizes, … and colours

Downstairs is where the actual museum is. This is pretty small, and mostly consists of a series of displays and videos that explain the cheese making process, with a bit of a focus on the history of it in the Netherlands. 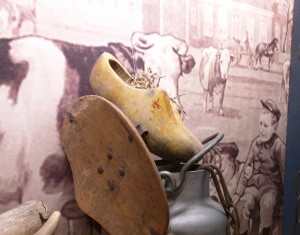 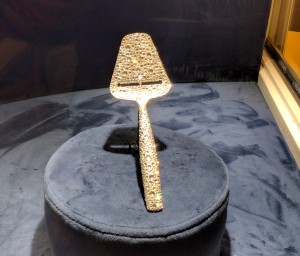 Additionally, in the corner is what looks like a diamond-encrusted cheese slicer. It’d be terrible to get clean. What I assume is an older version of this was stolen last year.

You can also dress up as a traditional Dutch cheese maker, and have your photo taken against the backdrop of a perfectly common scene. This claims to go on their Facebook page where there are prizes for the best one. But, they don’t seem to do the actual uploading or get around to judging. 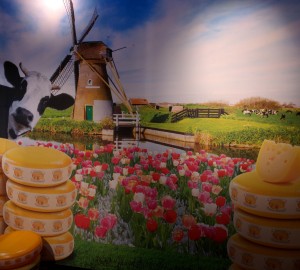 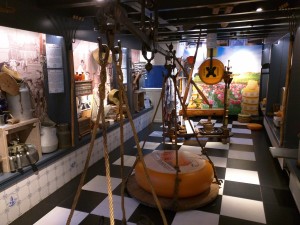 This place is a bit of a tourist trap, but if you’re early for your scheduled visit to the Ann Frank House and want to buy some cheese with added experience, it’s not so bad.

I have too much cheese in my fridge right now.