I am attempting to gradually visit all of Amsterdam’s museums in roughly alphabetical order. The previous one was ARCAM – Architecture Centrum Amsterdam. The next one is the Amsterdam Museum.

(This might be slightly spoilery, but hopefully not too much.)

The Amsterdam Dungeon is not something I’d put on a Wikipedia list of museums, but it was there and so I went. Ostensibly it’s historical, and it does cover some of the history of Amsterdam. But you’re not going to learn all that much. What it really is, is a somewhat interactive “house of horrors” type event, where the theme is the more violent or gruesome elements of Amsterdam’s history. 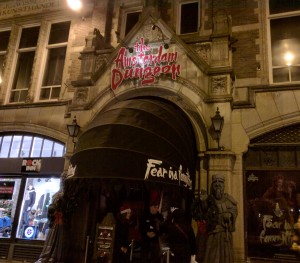 Do you dare enter… the Amsterdam Dungeon?

Unfortunately photos were not permitted inside, so this is going to be light on images.

How it works basically is that you’re batched together in groups of 25 or 30, and moved from room to room. Each room contains an actor who tells a story about some particular thing that happened to people in the past. They tend to pick on a few members of the audience, and re-use them in a few different points in the whole thing by putting them in the production as the accused, or as the helper with a dissection, or whatever.

The stories themselves range from explaining how people were forcibly recruited into the VOC (the Dutch East India Company), showing how people were selected by the Spanish Inquisition, to putting everyone into a labyrinth. I’m not sure what the historical lesson of that last one is.

It does finish with an entertaining climax which I won’t ruin. Just to say that if you’re with anyone who is jumpy, sit near them at every chance for best value.

The Amsterdam Dungeon isn’t somewhere where you’ll spend time in careful consideration of history. However, if a few of you want something fun to do, it’s probably worth it (especially if you book ahead and get it cheaper.) Even better if you have friends who jump at scary movies. 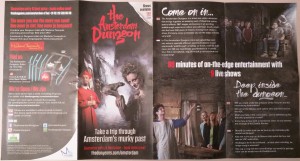